Lavender gets plonked in all my gardens; I couldn’t be without it, so in it goes with my fingers crossed that it will survive the claggy clay I garden on. I suppose it’s a scent of childhood: of garden visits; older women proffering tea and cakes; and, strange though it may seem, the excitement of exploring other people’s homes with dressing tables and bathrooms laden with lavender products in pretty boxes by Yardley. A lost world of thoroughly old fashioned, Miss Marple-ish, English lavender. Until suddenly, this summer it’s back, ubiquitous and not at all fuddy-duddy. English fields of purple lavender are heaving with visitors all wanting the same thing – that perfect selfie for Instagram. Of course, English grown lavender is nothing new; we’ve been doing it for centuries but it became increasingly commercially nonviable and almost disappeared for a while. Now people are finding new ways to make it pay and there are a scattering of farms across the country. My sister sent me the images above from her visit to Yorkshire Lavender, a dramatic sixty acre site, three miles west of Castle Howard, now celebrating twenty-two years in business. And shortly afterwards I spotted another family related lavender visit, this time by my niece, who took a wonderful image of her two little girls running along the rows of Mayfield Lavender Farm with a dramatic and menacing iron-grey sky threatening a deluge. This image was so alluring that I went to have a look for myself, making the trip across London to Banstead in Surrey by public transport, which obligingly dropped me right outside the entrance. I had never seen lavender growing commercially before – it wasn’t quite what I expected. 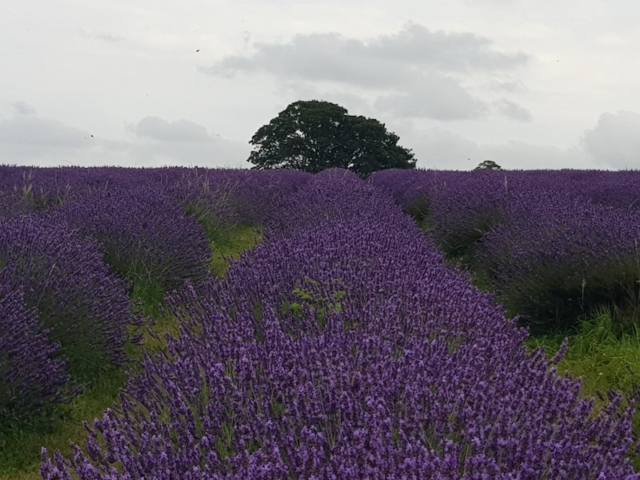 The first thing to hit me was the scent – it filled the bus before the doors even opened, but it wasn’t quite the scent I had in mind. Lavender is such a powerful plant in our culture that, to quote the famous Culpeper from his book of 1652, The English Physitian – lavender is ‘so well known, being an Inhabitant in almost every Garden, that it needeth no Description’. I would have agreed with him except sometimes our expectations are challenged, and here was an example. The leaves of lavender are pungent and produce a green and woody base note. Standing in the midst of 25 acres the leaves sang out loudly, along with the sweeter flowers. I have since found quite a few recipes which replace rosemary with the narrow leaves of Lavandula angustifolia – worth a try. The second notable thing, which I was unprepared for, was the realisation on entering that I had arrived at a veritable event. Mayfield cultivate twenty-five acres of green belt land and because of this designation are not permitted to erect any permanent structures. The only way to welcome visitors has been to erect a kind of mini tented-village which offers a shop and somewhere to sit with food and drink bought at the café. There are also portable loo units, and parking of course. It’s a jolly affair with an air of a summer fete. And then there is the lavender – stretching up to the horizon and dipping away. How were people engaging with the sheer singular power of it? The answer to that question is that they fell into two groups: those who remained close to the facilities and those who wondered to the far reaches of the site. Mayfield have thoughtfully provided some points of added interest for the first group: a shiny red tractor; a shiny red telephone box; a shiny metal vintage Airstream; and a little further away, an open sided wooden pavilion. It quickly became clear that all of these were being used and appreciated by people intent on the taking of photographs; particularly selfies and Instagram worthy portraits. This was probably the most demographically varied group of people I have ever come across in a horticultural environment. They posed in groups, in couples, in families; there were a few professionals with all the gear, as well as the odd solo visitor snapping themselves on a phone. Whereas a ‘garden’ type outing is predominantly something for the middle aged, here age was no barrier to enjoyment and, indeed, there were many young people out for the fun of it – the Insta generation. While people-watching was very enjoyable, I wanted to see what the experience would be like from the other end of the field. For those who could be bothered to walk for ten minutes or so there was enough space to take a wide shot of the landscape with no-one else in it. You could easily pretend that this was a country walk and you just happened upon a photogenic crop. My walk along the rows was rewarded by the sight of young men cutting bunches of lavender to supply the shop, some new planting areas and a glimpse of someone exuding authority whom I suspected was owner, Brendan.  I was right. Brendan is a frank and communicative man with disarmingly guileless charm and cool blue eyes. He was happy to chat to me answering my questions in what certainly appeared to be a straight and unrehearsed manner. His only hesitation was in discussing his future plans, which I promised not to divulge, so let’s move on back to the genesis of this business.  His story, briefly told, is that he was involved in fine fragrance, at the big business end. The lavender field was a marketing idea at a time when he was trying to revitalise the brand of Yardley for owners, Wella. Yardley had grown lavender here in Victorian times and there was an historic and romantic connection which he felt could be exploited to reach a new generation, if it was associated with something contemporary like a spa. Wella weren’t keen to own a farm so he went ahead and rented the land himself and, with the help of a local charity developed his idea. Events changed the amount of time he could spare for this project when Proctor and Gamble bought Wella and Brendan was given a challenging new role.  Travelling the world for work becomes wearing on family life so twelve years ago Mr Brendan Maye looked at the field he rented and saw a new business opportunity which would keep him at home, and he called it – Mayfield. By the way, did you know that Proctor and Gamble produce many of the huge perfume brands which we are so familiar with, along with our washing powders and less glamorous products? As you know I love a personal story but it was of interest to hear about some of the practical issues. The farm is first and foremost a business which has to work for his family and, by extension, his employees. In order to make a profit he has to add value. The days when harvesting lavender as a crop and selling it on for satisfactory financial gain are long gone – if indeed they ever existed. ‘The only way it can work is if you don’t give profit away, which means you have to produce and sell lavender products yourself, directly to the public.’ The rise in visitor interest has been a surprising add-on with benefits for the bottom line but also a number of challenges. Brendan explains that essentially he is running four businesses, each with its own rules and problems: he is in agriculture; manufacture and retail; catering; and finally, events. Agriculture is the easy bit, he says. Dealing with the public is, well let’s just say it requires strength of character and bucketfuls of good humour. ‘When the car park empties after a busy day we spend hours picking up rubbish, including a trail of dirty nappies which people hide beneath their vehicles.’ People break plants too – stepping through rows or snapping off branches for a ‘special’ shot. They have even been known to dig up and steal whole lines of newly planted plugs. But they are there, in droves, spending money and all these things have to be managed. I asked about the huge diversity of visitors and he says that the first to come were the Chinese. I presumed he meant whole coachloads on holiday from China but he didn’t, he was talking about British Chinese, especially Londoners. The next question had to be, why the Chinese? He had actually asked this question himself and the reply was simple, ‘we like lavender’. Mayfield has gathered a following from an increasing number of communities including people from the Middle East, Malaysia and South East Asia – we all love lavender it seems. The word spreads and so does the interest – it must be rather wonderful for the Maye family, as it was for me. My visit encouraged me to do some research on lavender, its history and uses, its cultural importance and geographic spread. It is a fascinating plant and II look forward to visiting again next year, perhaps taking a trip to another of our gorgeous lavender fields – I may even take a selfie for Instagram. My thanks to Brendan Maye for taking the time to talk to me. To my sister Deborah for her images of Yorkshire Lavender Farm and to my companion of the day Linda for some of the images included as the lavender seemed to bamboozle the focus on my camera at times.