Shopping with my mother is never dull. It doesn’t happen very often but when it does it is invariably an adventure. This time it involved a trip to the foothills of the High Atlas Mountains in Morocco where she was considering buying a country house. This led me to discover the deliciously spring-green hillsides surrounding the important Berber market town of Amizmiz (pronounced Ams-meez). The air is clean and fresh up here, at over 1000 metres, and nature was showing off its miraculous power of renewal in that burst of energy that all youthful things possess. What a wonderful place to make a garden, I thought. 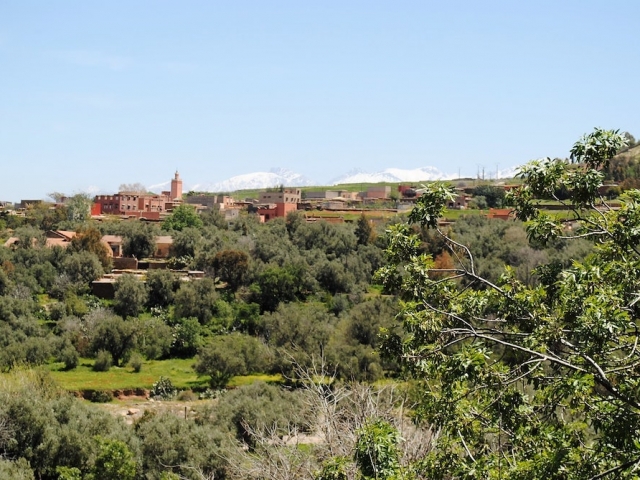 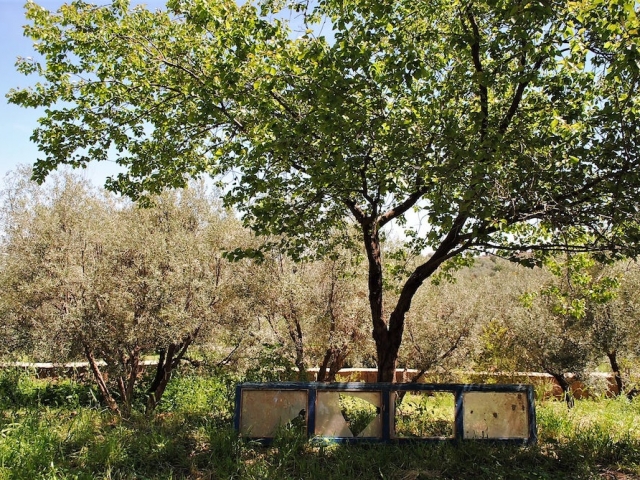 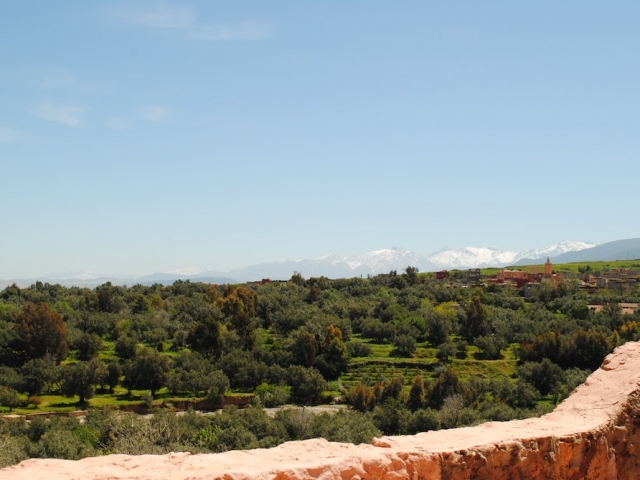 Making a garden here was what my mother had in mind but, much as I was looking forward to dreaming along with her, the hour long trip from Marrakesh had plenty to distract my attention. We stopped for coffee at Lalla Takerkoust near the barrage, a dam made famous by Esther Freud in her novel of 1992, Hideous Kinky. The view across the opaline water, encased in its pale golden setting, with layered backdrop of hills including snow covered peaks, had a surreal, still beauty. The café also seemed lost in another era with its art deco influenced plastic chairs and sleek but worn sun loungers. It had been in the family of our entertaining host, Omar Chegar, since it opened in 1937 and its three dramatic terraces overlooking the water still retain traces of a glamorous past. 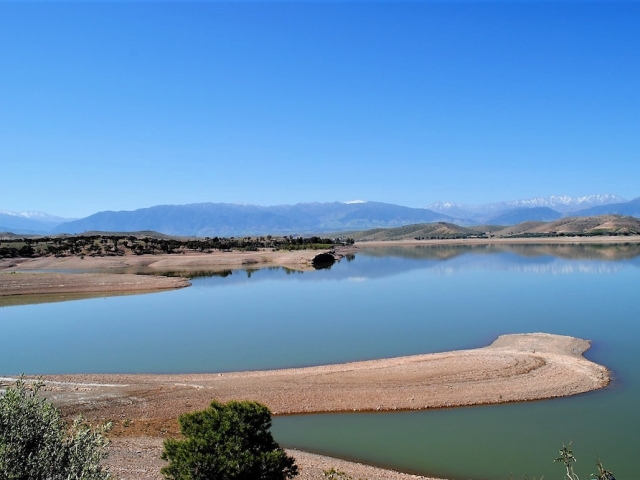 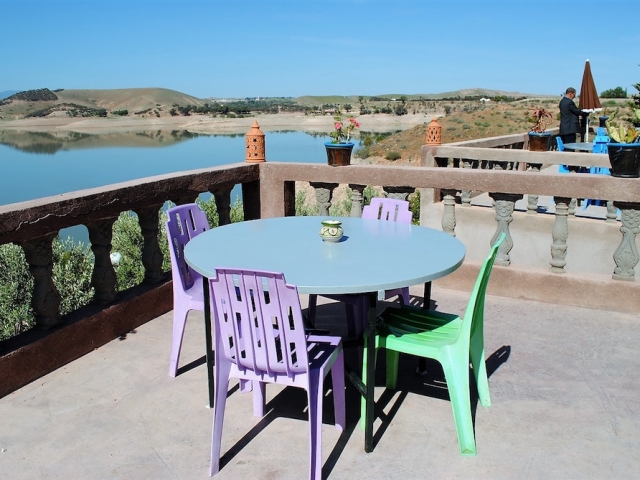 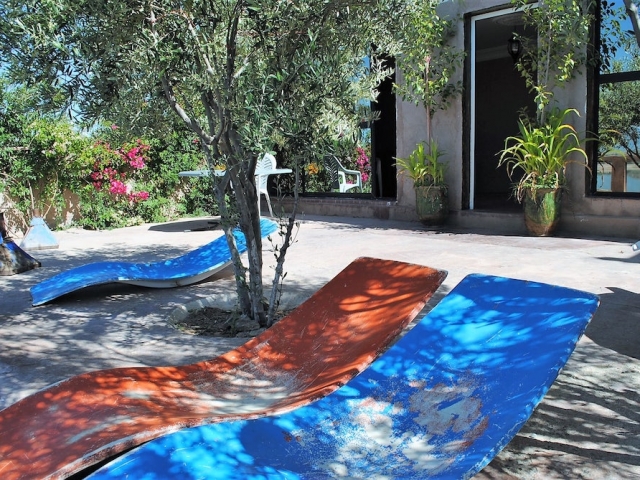 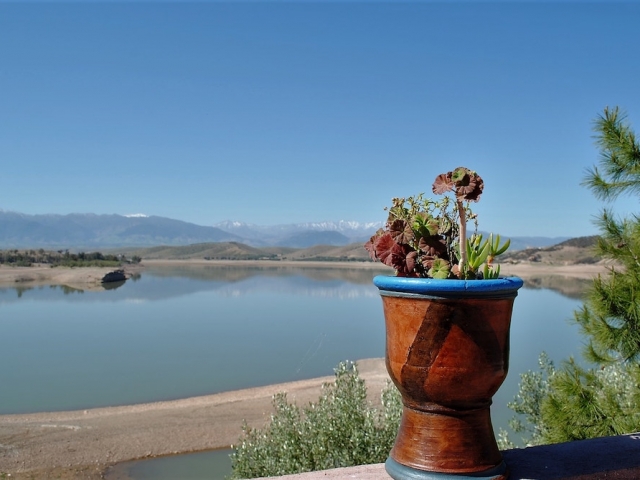 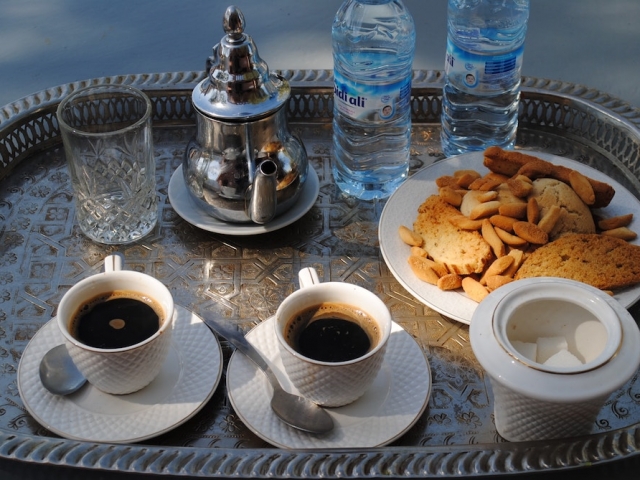 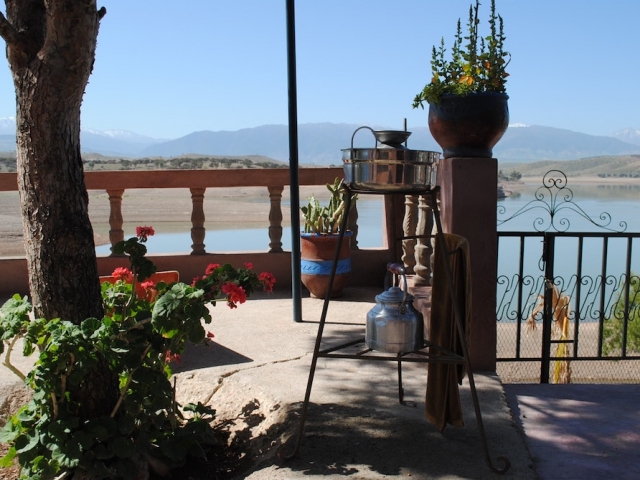 Refreshed and laden with the cutest animal-shaped brazier my mother had spied in the kitchen, we drove on to a hamlet that had all the charm of a story book. The first house we viewed was a little gem of a bachelor’s cottage, cute as a kitten, with a spectacular mimosa filling the entire courtyard. But there was no garden, and even the panoramic view from the roof terrace could not make up for that lacuna. The second, however, was the one we had come to see. It had pretty much everything one could want from a garden: a beautiful setting, interesting topography and an air of mystery. To reach the entrance you have to step across a little bridge spanning a running water channel, like a moat around a castle.  Once inside the rammed earth walls the land dropped in three landscaped terraces filled with citrus, olives and pomegranates, augmented by nuts, figs, apricots and plums. With views down to the valley and snow-capped mountains in the distance, this was a private garden to desire. 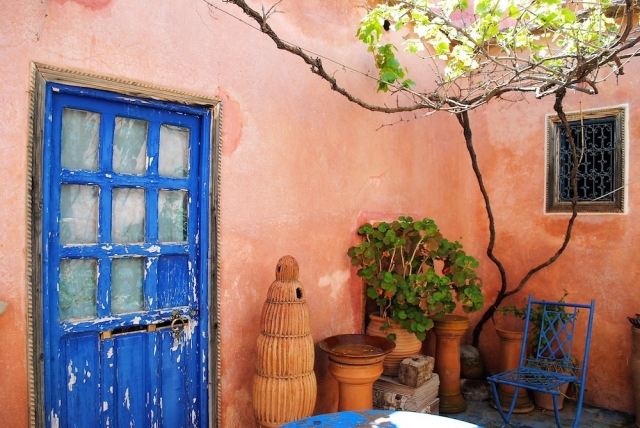 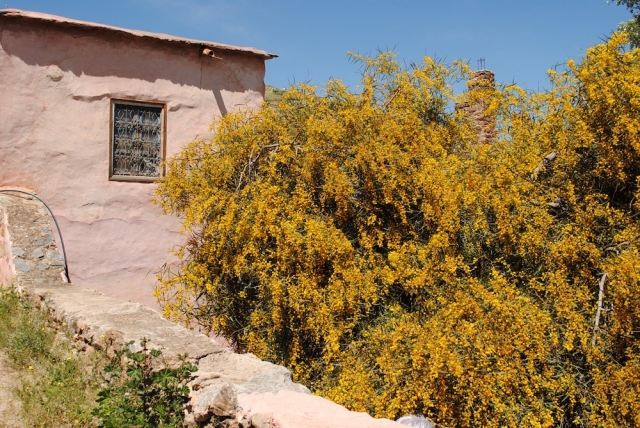 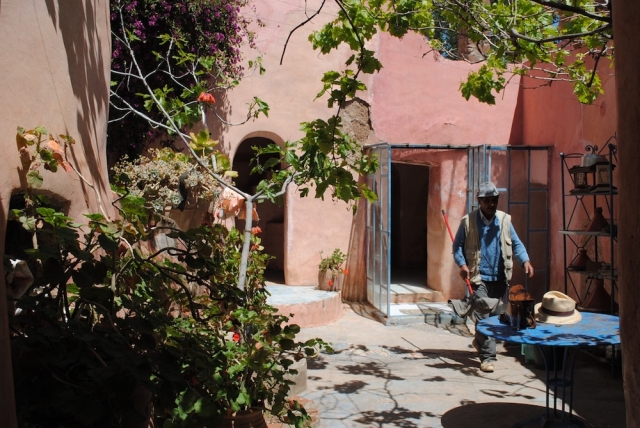 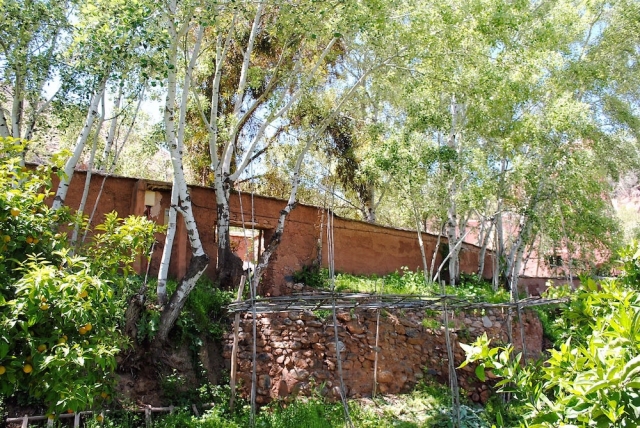 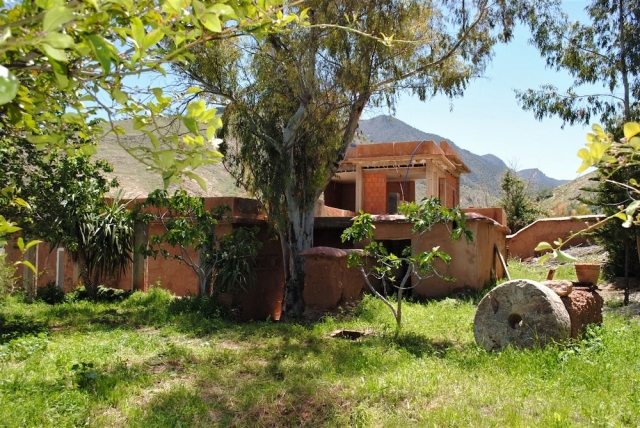 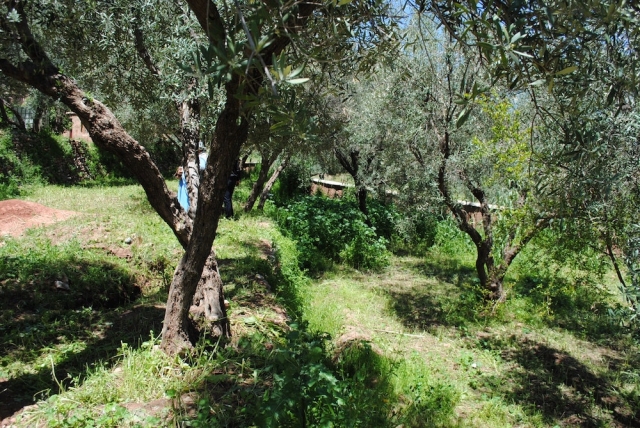 Leaving was a wrench but lunch was set for us nearby, in another garden in paradise – The Maroc Lodge Resort. It’s a commercial name for what is very much a family property, open to guests who share this delightful place in their own private pavilion. The path down to the reception point gives a taste of what’s to come; the pace is slow, the landscape terraced and the planting bountiful, eccentric and joyful. Maroc Lodge is famous locally, and its owners have been here a long time. It’s a love story that everyone here is familiar with, so here it is again, in brief. In 1931 a brilliant young surgeon at the Paris Faculty of Medicine, Henri Dubois-Roquebert, came to Morocco on holiday and fell in love with the natural beauty of the country and the charm of its people. He decided to make it his home and the following year moved to Rabat where, in 1935, he built a surgical clinic. Two years later he was called upon to operate on the King, Mohammed II, with whom he developed a lasting friendship, which continued with the next generation at the accession of Hassan II.  In the 1940s the Caid of Amizmiz also came to his clinic and, in gratitude for his care, invited Henri to visit. The young doctor was struck with the felicity of the place, bought this property, built a home and came as often as he could, as a relief from his heavy duties in Rabat. Henri died in 1971 but his wish was that this home would remain in the family for all to enjoy. In the year 2000 his three children decided to inject new life into the three hectares and developed the idea of a mountain Berber Lodge which would honour the memory of their father. His son Bruno had the idea of building individual villas and is proud of the fact that not one branch was broken in the development of the site. 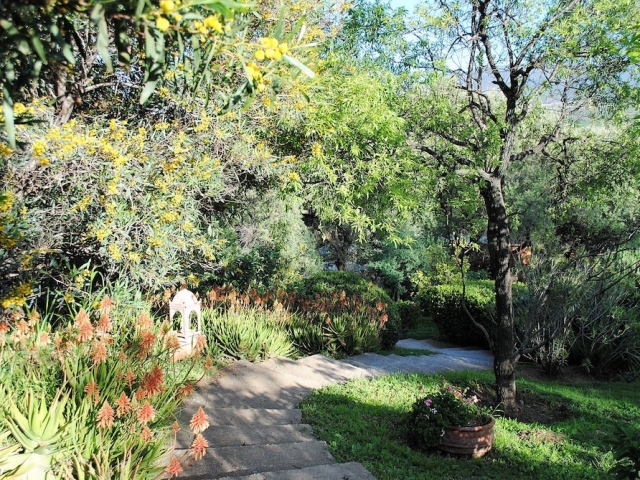 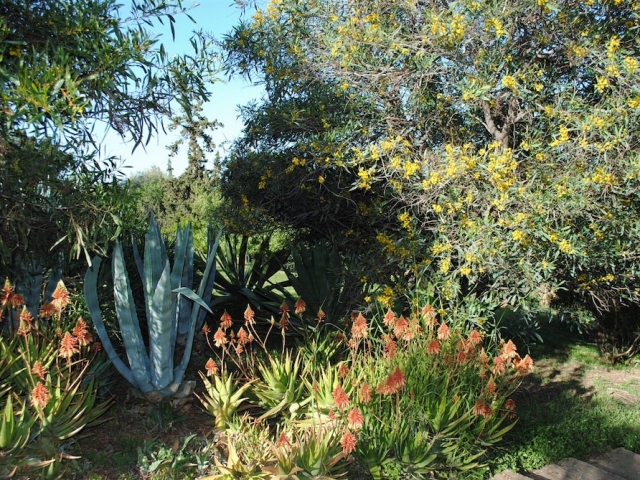 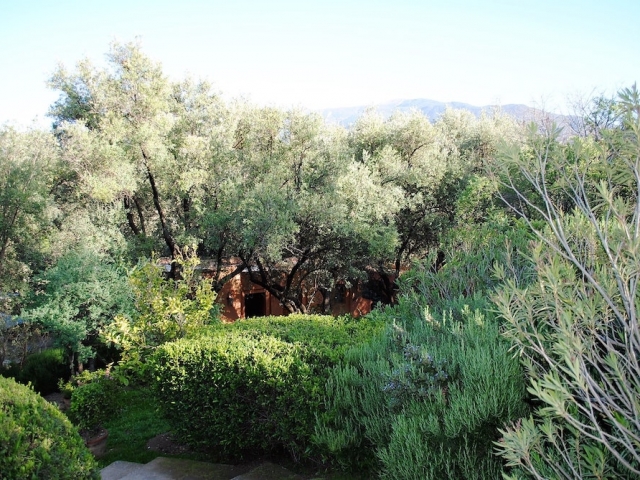 Today it is Henri’s daughter, Béatrice, and her husband, David Clerc, who have made their home here and care for the domain – including the garden. David recalls the first steps in the development of the grounds in 2003. The family were clear that respecting the landscape and the trees and vegetation that had called it home for centuries was essential. The architect responsible for the villas was briefed not to disrupt the vegetation on the site and this spirit imposed a kind of logic for Bruno who, working with the natural slope of the terrain and the existing trees, defined the terracing sensitively, all achieved by hand. Today, I notice the rhythm of the pathways which sashay along, connecting people and places with an easy grace, while an irrigation seguia winds its way through the design like a contrapuntal melody, coursing cool freshness through the site in the summer months. Then there is the swimming pool. This is an essential luxury and I see them all over the place looking awkward and utilitarian but here the organic shape of the infinity pool looks like it has been modelled on a natural mountain rock pool. Plus, it gives onto a splendid view which raises its visual value, becoming a dramatic centre-piece rather than a bit of necessary equipment. 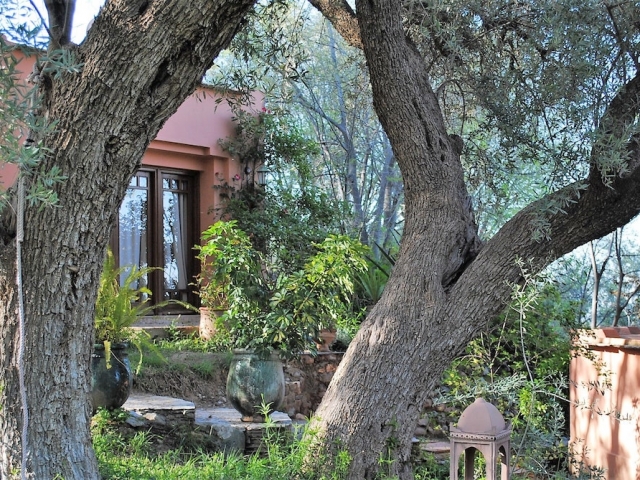 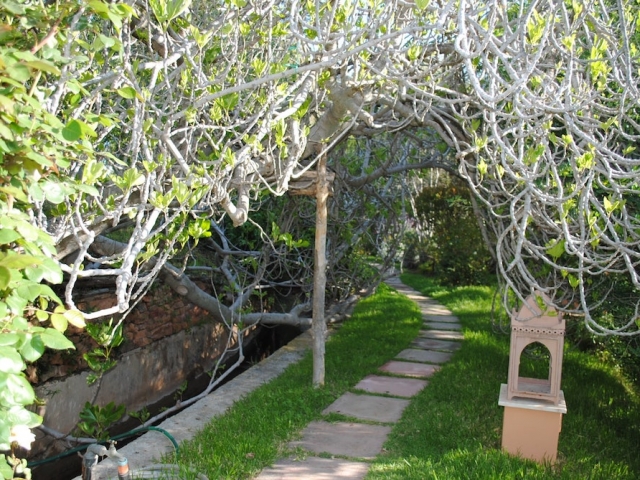 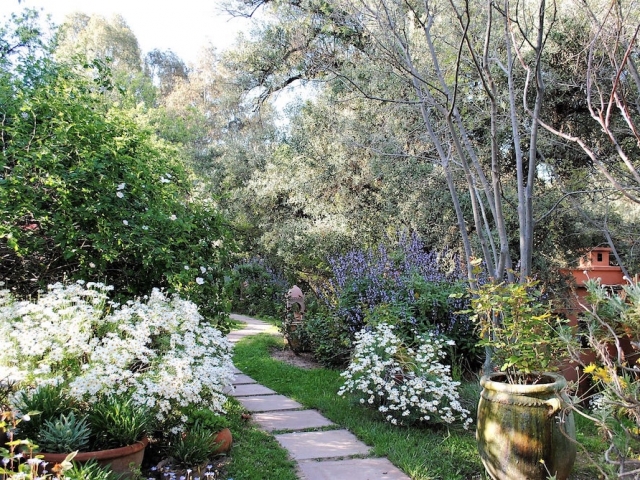 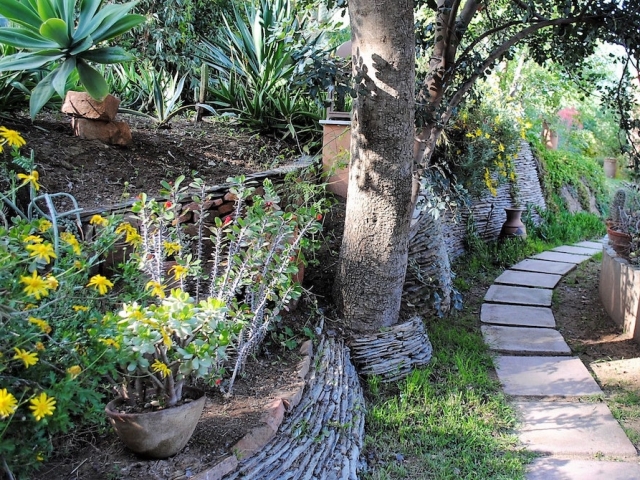 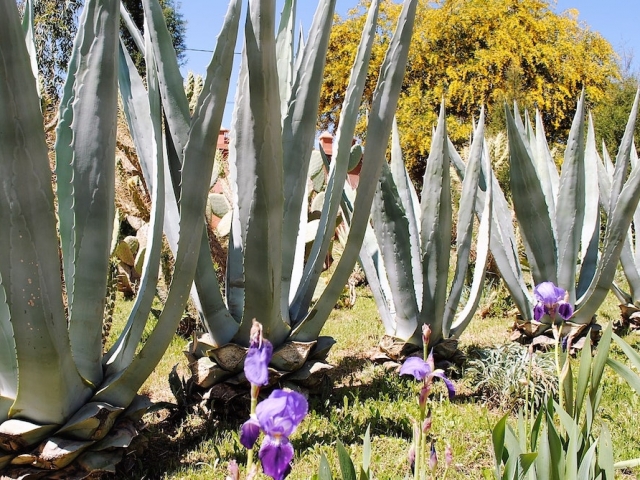 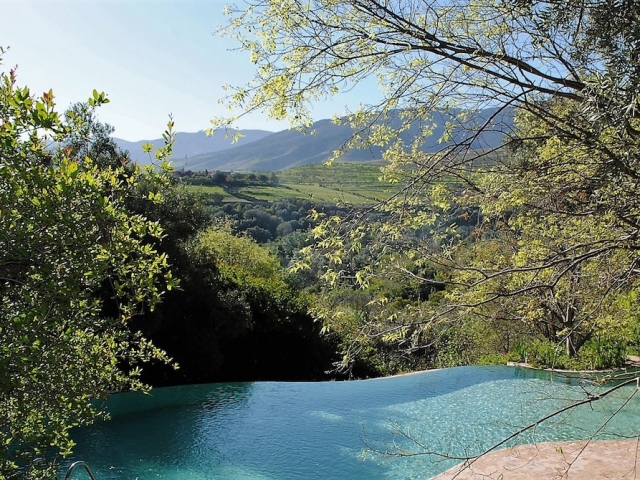 When asked about the planting David shrugs his shoulders, looking suitably gardenesque in a hat fit to grace an Impressionist painting, ‘the garden is like me – anarchic’. I paused for thought – what does this mean in the context of this serene garden with a real sense of order? At its most simple it could be that, like many people who work their own gardens, David has never drawn a plan or devised a precise planting scheme but just works instinctively. At Maroc Lodge, a landscape design with structure, viewpoints and some large interventions like the addition of regal, old olives among the natural flora had already been put in place by Bruno. David and Beatrice have spent many years experimenting with planting schemes which compliment and complete the scheme. David describes this as having been a natural development: at the beginning through trial and error with some plants like bougainvillea refusing to thrive, but others, like the sage that grows wild on the hillsides, proving to be stalwart performers. In fact many of the really showy plants are natives from the surrounding area but there are some surprises, like lemon grass, which appears in great, thick clumps throughout the beds which follow the paths down the hillside. 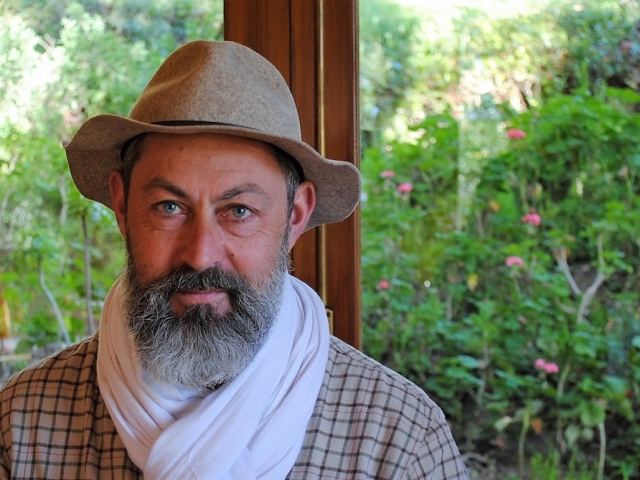 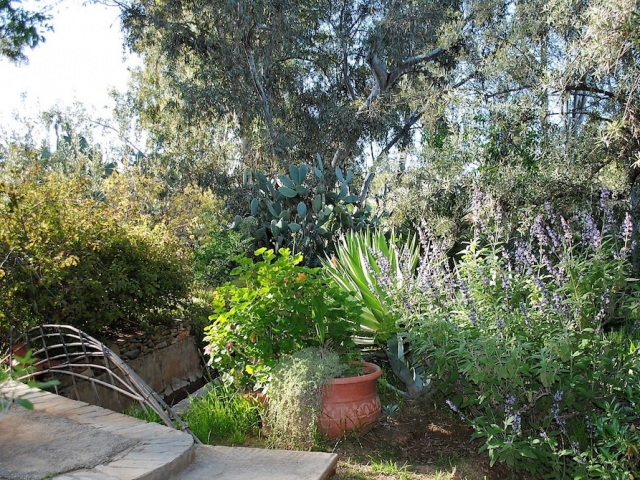 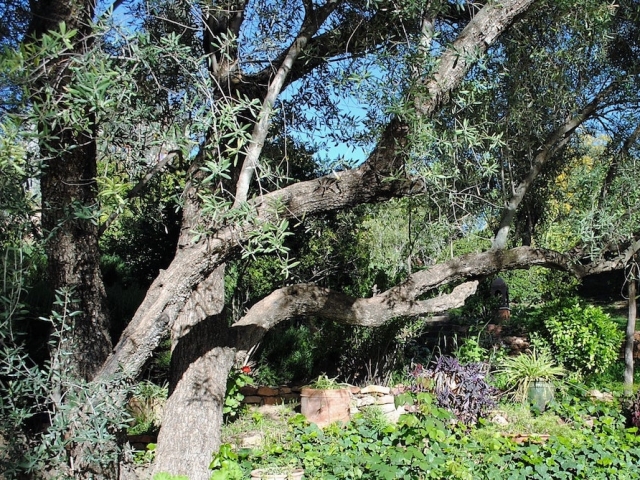 Béatrice joins us and David smiles as he acknowledges his wife’s contribution – four hundred handmade pots, of all shapes and sizes, animate the garden with their often quirky personality. Béatrice explains that the pots have allowed them a greater choice of plants as they can control the quality of the soil in them. There are many exotics, succulents and even cacti which add piquancy. They grace the sensual curves of slate retaining walls or form a little conversation piece on a terrace or under a tree. Some are empty, simply a vase left outside and others are full to bursting point. My mother has brought Béatrice a gift of an unusual amaryllis she has grown herself – ‘ah’, says David, ‘pot number four hundred and one!’. 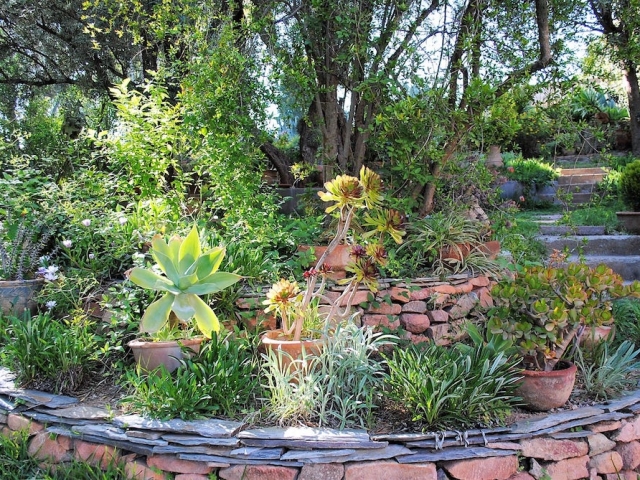 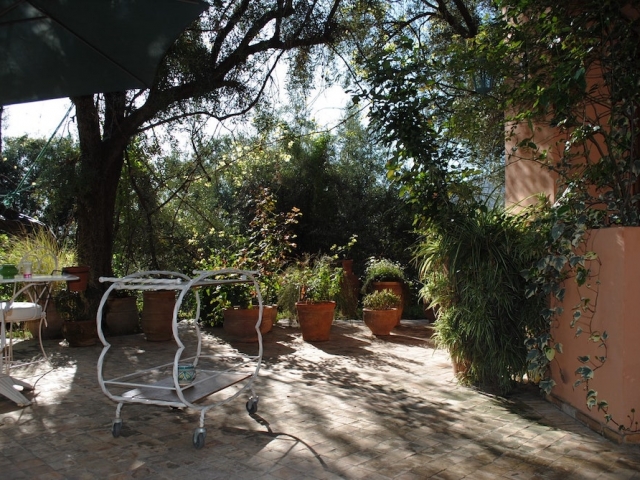 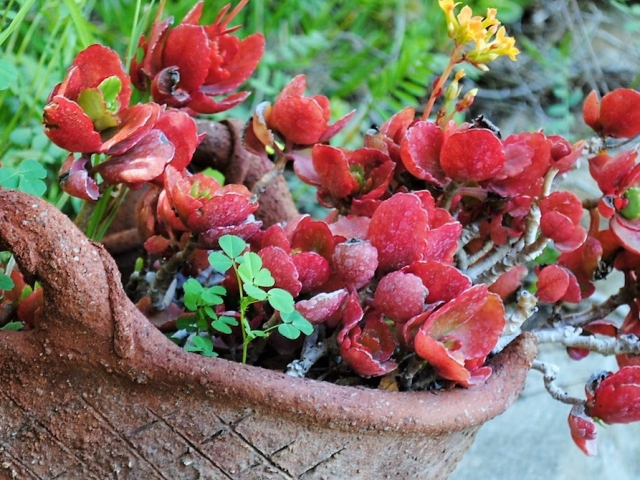 There is much to explore in the garden and as the afternoon progresses and evening arrives I notice the shapes and colours of specimens I have missed in the stronger light. In the early hours of the morning the sky is black and populated with stars. There is a kind anarchy up above me and, as I think about the natural beauty of the spring countryside, the scattered red of poppies, the delicate birch leaves in the breeze, the snow and the sun, I realise that there is a kind of powerful and beautiful anarchy all over the landscape. Is David’s ‘anarchic’ approach just another way of talking about the power of nature’s grand order? I suspect so; like Vita Sackville- West he is a fan of the ‘accidental’ in a garden, which he calls anarchic. However one describes it, we all recognise the power of nature to move us and, lost in this garden in an Amizmiz spring, I certainly feel its presence.

My thanks go to David and Béatrice for their kind welcome and for talking to me about their garden. I was sorry to have missed Bruno.

If you would like to know more about Maroc Lodge visit: http://www.maroc-lodge.com

If you would like to stay with my mother Gloria Mudaliar Hutchinson in Marrakesh visit: http://www.darelmudal.com/en-gb